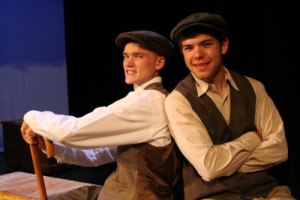 Directing a production can be an overwhelming job! I usually have at least one nightmare while I am in the midst of preparing for a production. I'll dream that we are performing the play and one child is on stage in jeans and a T-shirt because she forgot her costume or everyone is forgetting their lines or some such worry. It's a lot of pressure, but it's a lot of fun, too. Here are some tips from what I have learned.

Begin each rehearsal with a prayer. Pray before each performance. Pray a lot of times in between. If you are having an especially difficult rehearsal and things aren't going satisfactorily and you are losing your patience, stop the practice, get everyone's attention, and pray. Sometimes I have had all the cast members kneel in a circle on the stage when we pray. It's a good way to dedicate the theatre, the production, and the cast and crew members to the Father and remind everyone that it is all for His glory.

If you're like me, you will think, "Oh, I can just tell them where to stand on stage and they'll remember." Beware! I have learned the hard way that it usually doesn't work like that. You'll end up with little people in the back and big people in the front and seventy percent of the cast on one side of the stage with thirty percent on the other side when they are supposed to be evenly distributed! Mark spots on the stage with masking tape or tape that glows in the dark so that everyone knows where to stand in a particular scene. Sometimes one piece of tape can be assigned to different cast members for different scenes. I usually have a "spot" for each cast member for the scenes when all or most cast members are on stage at the same time. When I say, "Go to your spot" everyone knows exactly what I mean. You'll want to try to get across to your cast members that they should walk casually to their spots so that it doesn't actually look like they are walking to a piece of tape on stage! 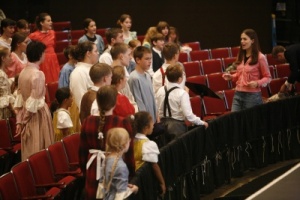 The first two years I directed a production I held practices once a week for several weeks and then more often as the performance date drew near. Since then, I have found that a more intense, focused time for rehearsals has worked better. For the last several years I have held about eight morning practices over a two-week period, each lasting between three and four hours. We then have a dress rehearsal and are ready to perform. This isn't many practices, but they are close together and it is easier for the children to remember your directions from one day to the next. You may want to allow for more rehearsal dates, especially if you or your cast has not had much theatre experience.

Be strict about proper behavior during rehearsals. You don't have time to deal with bad behavior, so don't allow it. I don't recommend allowing the children a lot of free time to talk with other cast members, even when they are not on stage. The rehearsal time needs to be focused on the work of the production. Even if you have a group of "good kids," foolishness is still bound up in their hearts. Many of them are going to want to be silly and talk about things unrelated to the production and bad behavior is likely to rub off on others. Keep your cast members in sight much of the time, and don't allow them to go off in the dressing rooms by themselves during rehearsals. Try to keep the focus on honoring God with the production. Having a good time and associating with friends have their places, but the main focus and primary goal of your production should be to glorify the Father.

To avoid unnecessary distractions, I have established a dress code for rehearsals.

A church gym or auditorium is a great (and often free) place to hold your first few rehearsals, especially if you are paying to rent a theatre for the performances. While it doesn't allow you to finalize everyone's placement on stage, etc., since the layout will probably be different from what you will have at the theatre, it's a good way to work out some initial kinks and get everyone familiar with the action. 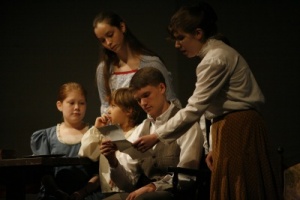 For most of my productions I have given the parents guidelines for how their children's costumes need to look and have let them go from there. All costumes then have to be approved by me. I have also borrowed some costume pieces from a local children's community theatre. I have my cast members wear their costumes each day of rehearsal the week of the performances. This helps us get into character and put more into our acting. It will also help you as the director get an idea of how things will look when the play is performed.

I like to keep my sets simple to cut down on the time and money spent on the productions. Some years I have given the parents a list of needed set pieces and props and have asked them to loan what they can. I have also borrowed large and small items from a local children's community theatre. They have allowed us to paint or alter many set pieces to suit our needs, which has been a tremendous blessing. 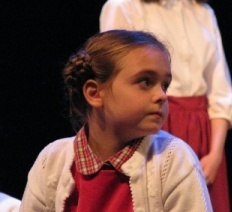 Over the years I have held performances in every month from August to December. Considering travel and school schedules, as well as cold and flu season, I recommend September as a good month to produce a play if you are going to have a condensed practice schedule. If you want to spread your rehearsals out over several months, a springtime show will probably fit your schedule better.

Things to Tell Your Cast Members 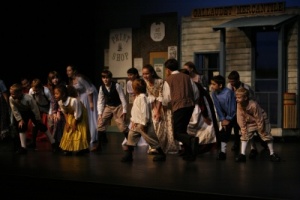 When I direct a play, I distribute the scripts to my cast members a few weeks before rehearsals begin. I tell the cast members to learn their lines and cues before we start practicing together. They are also supposed to practice the songs before rehearsals begin. Each household should have its own recording of the songs. When cast members study at home, rehearsals go much more smoothly. You don't have to take time to help people with their lines and prompt them when it is their turn to speak if they have already learned this at home. Cast members can more easily to get into character and learn what to do with their hands if they aren't holding a script while on stage. Ban scripts from the stage after the first rehearsal.

Don't Be Yourself, Be Your Character 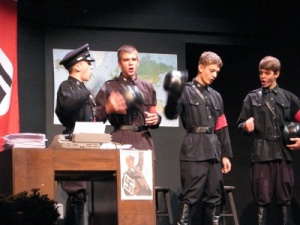 Keep backside time to a minimum. When you are talking to another cast member on stage, you are not really talking to him. You're talking to the person in the audience who is sitting on the back row. Make sure that person can see your face and see your mouth moving and see the action.

When I tell my cast members, "Say your lines how?" They all know the answer: "Loudly, slowly, and clearly!" It has become a running theme from year to year for us to laugh and say that together during rehearsals. I say it over and over because it is important. If the audience can't hear the lines, the cast members have wasted a lot of time to learn them. If the audience can hear noises, but can't distinguish one word from another, the experience of watching the play is likely to be grueling and frustrating instead of pleasant and encouraging. Make sure your cast members say their lines how? Loudly, slowly, and clearly! 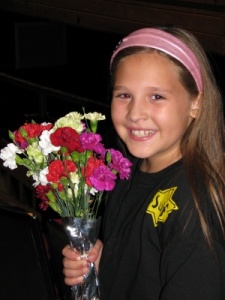 The Show Must Go On!

I'm sure volumes could be written about the mishaps and mistakes that have taken place on stage over the centuries! Here are a few from the Homeschool Dramatic Society's history. No matter what happens, the show must go on!

When the snobby English girl in I Am Dreaming of America angrily whipped off her cape before her first solo, she accidentally grabbed her pearl necklace as well. The necklace broke and a shower of pearls fell to the stage and began to roll around. The necklace was a special family heirloom that belonged to the actress' grandmother, but she didn't miss a beat. She went right on with her song as if nothing had happened. The show must go on!

During our first performance of Sign of Love, most of the children were standing in a circle ready to perform a singing game. One of the younger boys suddenly had a seizure and fell to the stage. The lead actor went over to him and helped him off the stage, and the show went on. Everyone kept his cool and to some the incident looked like it was a part of the play with the lead actor helping a little boy who was sick or hurt. The show must go on! (The seizure was an isolated incident for the boy and he turned out to be fine.)

During a performance of I Am Dreaming of America, we reached the scene where several of the younger girls jump rope together. We had established who would jump where during the scene, but some of the jump ropes were missing during the performance. Those who had ropes began to jump to the music that was being played and in the middle of the song, unprompted, one little girl who who had a rope stopped jumping to give one of the girls who didn't have a rope a turn. I was so proud of her! She could have stayed in the spotlight and jumped through the whole song, but she gave someone else a chance. The show must go on!

During a performance of Journey of Faith, one girl was supposed to enter and say a line. She didn't come on, and no one knew why. We waited through an awkward silence, and finally she appeared. She had answered someone else's cell phone that was ringing behind the stage and had thus missed her cue. The show must go on, but the cell phones must go off!